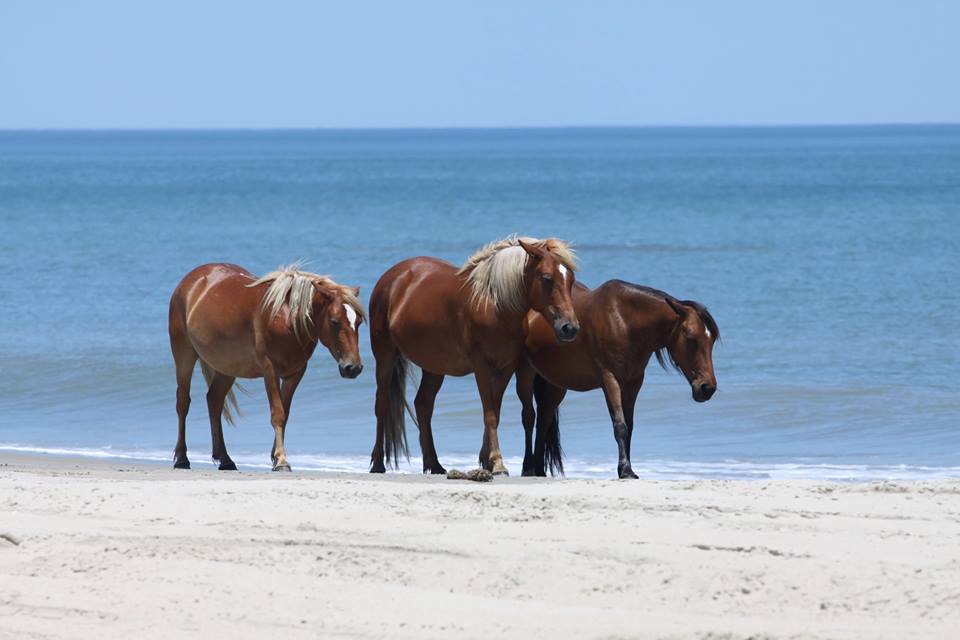 In today's modern world, the average American has very little opportunity to witness wildlife in their natural habitat. Thankfully, there are some undeveloped locations around the world that still offer visitors a chance to get a glimpse of various creatures that have yet to be domesticated. One of these preserved animal sanctuaries actually happens to be located near the quaint coastal town of Corolla, North Carolina. It's here where both visitors and locals of the area can occasionally spot wild mustangs grazing on vegetation or trotting along the sandy shores. These intriguing horses are known as the “Wild Spanish Mustangs of Corolla” due to their historical background and current location.

The mustangs of Corolla are some of the last wild horses known to run freely the United States. Prior to the 1980's construction of highway NC12 connecting Duck and Corolla, the mustangs were still romping around the small local towns. Since the area has expanded over the past few decades bringing in additional residents along with more buildings and vehicles, the horses have been relocated to a nearly eleven mile long stretch of undeveloped land just North of Corolla on the Currituck Banks. Visitors to the area can make their way through the sandy dunes if equipped with a 4WD truck or SUV in order to occasionally witness the wild mustangs galloping along the beaches. There are also all kinds of adventure tours available that help spectators get as close as possible to these gorgeous wild horses.

The wild Spanish mustangs of Corolla are said to be descendants of the horses that were brought to the Americas by Spanish settlers. The biological connection was discovered after scientists performed genetics tests in addition to comparing and studying their physical and physiological characteristics. One of the first Spanish settlers who was believed to have brought the horses to the New World was a man by the name of Lucas Vasquez de Allyon. In the year 1521, he and his men were sent to the Americas by the king of Spain in order to colonize the coastal area we now know as North Carolina. Once settled along the banks, they began to fight with the local native Indians and were forced to flee the region, leaving behind most of their livestock. Historians claim that the mustangs then remained in the area and are directly related to the ones that still inhabit the area today.

The Corolla Wild Horse Fund was established in the 1990's to ensure that the wild mustangs of Corolla are protected. The organization was then incorporated as a non-profit in 2001 and has since done their very best to help preserve the habitat of the horses. There is also a museum located at their headquarters which provides visitors with plenty of information about these beautiful creatures.

If you're ever in the area, head on over to the beaches or schedule a horse tour so you can witness these stunning beings in their natural surroundings. Just keep in mind that the mustangs are indeed wild so you won't be able to get too close to them or feed them as their diets are much different than domesticated animals.